Rolling with the Punches

I think I have been mentally preparing myself for the day that running may have to stop. This day may never come, and I may be one of those lucky women who get to run on the day they deliver, but I'm making no promises or deals with myself - I know I can't control it all! But, being prepared is better than being caught off guard or living in denial.

Last week my running got sidelined by a little injury. I have been pretty lucky in the fact that I haven't had major running injuries that I have left me in the dreaded "boot" or sidelined for months at a time. Sure, I have had the injuries that have kept me from having great training cycles or ones that kept me from running for days at a time, but really, nothing major. Well, last week my right calf had other plans. I did a great speed work session on the old hamsterwhizzle where I saw paces I hadn't seen in months! Paces that started with an 8! And were in the low 8's! I felt great afterwards, too! But Sunday when I went for my run, my calf seized up around 30 mins into my run and then I was left hobbling for the rest of the day! Argh!

Monday when I went for my run again, I lasted 20 mins before it seized up again and I called it quits. I came home, iced, put on compression socks and declared Tuesday a rest day. I've never had calf problems before, so this was new. I started thinking it was pregnancy related, but after thinking about the speed work I did, I think it was because of that. I would be running at a good clip, then the plan called for walking one minute in between. I think the stopping in between made my calf angry.

Wednesday my calf was still kind of 'twingey' so I declared another rest day. Thursday I was traveling to NorCal so yet, another rest day. I tried not to get down on myself, especially when the runs I did have earlier in the week had my HR cooperating like a champ!  Friday I set out for my planned run and I felt awesome! My HR was great, my energy was awesome, and I felt like I was floating. But then....then...at the 20 minute mark when I turned around to go home my calf seized up again! WTH? And this time it was bad! I was 2.5 miles away from home and I hobbled all the way back.

I felt defeated and worried about my race the next day. I knew in the back of my mind it would not be smart to run the next day so I called it after talking with my coach. I was disappointed but I sucked it up and knew a few more days off was smart. Ugh, rolling with the punches was smart but not what I really wanted to do.

Saturday I got up and got ready and head out to the race any way since my girl Alisyn was there running her first 50K! And my other good friend Layla was there spectating. I couldn't wait to be reunited with these two! I miss them sooooo much!

I cheered my butt off and was so happy to spend time with Layla and Alisyn's fiance Matt while waiting for Alisyn to come in. I even got to score some post-race food by playing the "preggo" card and getting some cold, juicy watermelon :) 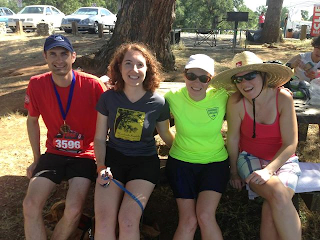 I still haven't ran since Friday, but today I'm going out for a test run and am hopeful. My calf feels good, I've been icing like crazy, making the hubbs massage it until I cry and I think if I ease back in I shouldn't have lost too much ground. I have only a few short weeks until SFM and I can't wait to run that and be reunited with so many other good friends!

On the pregnancy front, I'm feeling good, but I have definitely "popped!" Like...over night! I had a few days last week where I had some Braxton Hicks contractions, which are totally normal, but I could also feel my abs stretching. I really grew over a few days. When I got home on Monday from my trip, the hubbs just looked at me and said, "you grew! THAT is a baby bump!" I laughed, because I finally look "pregnant" and not like I just pigged out on a giant burrito at Chipotle. It's amazing every day the little things you notice. I go from not being hungry at all, to I NEED TO EAT NOW! OR I WILL CHEW MY ARM OFF! Or, from being totally full of energy to I need to take a nap right now! Your body definitely tells you what you need and when you need it! And it doesn't let you down until you answer it. I also got to see baby on the ultra sound thanks to my sister in law. She is a labor and delivery nurse (and a god send to a pregnant sister!) and took me over to the hospital for a peek :) It still brings tears to my eyes when I see my little blueberry moving around in there. (we may or may not have gotten to tell if it's a boy or a girl, but I'm not confirming or denying that) And hearing the heart beat is such nice reassurance. You go a whole month in between appointments and it's hard not to worry. But I am happy to report, the blueberry was busy waving at us, doing kicks and just generally being a busy, busy little baby! Ahhhh! 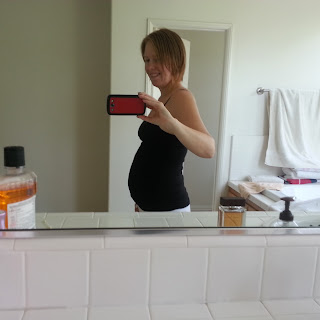 Obligatory bump shot :) See, I GREW!
I will leave you all with Lilly sporting her SFM doggy bandanna - she loves to dress up (well, at least that is what I tell myself!) Congrats to all of you who raced this weekend - lots of PR's and great race reports!!
Happy Running! 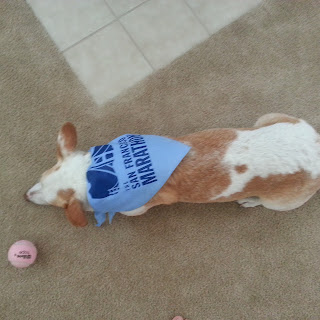 Re: calf strains.
I used to be dogged by these all the time..once you have one you need to do RICE. And you have to wait or you will re-pull.

To prevent what I do (in order of importance I think)

1) chi running style with LOOSE lower legs. Power should come from glutes and hamstrings NOT the calfs.

2) compression sleeves ALWAYS for speedwork or long runs or races. Or for every run.

3) Tissue flossing! Foam roller after EVERY run, or at a minumum every hard or long run.

4) DO not allow calf trigger points to persist! If you find 'em doing #3 you need to get rid of them..they are a weak point for a re-pull. Use a jackknobber or other such too.

Soooo glad to hear you're doing well! Also, I am super excited you are coming for SFM. I really want to see you!!!

I hope if I ever have a baby, I can run through it as well. Although, I don't even run healthy when I run for just one!

I love that you are blogging! Now I feel like I can keep up with you all the way in LA. I need to plan some LA time to visit, perhaps a race. :) I hope the calf feels better fast! Also totally wish I could have been there for Alisyn's 50K although Eugene was great too. Miss you!

To Get Pregnant said...

There is really no other sport like running! If you enjoy running and living active lifestyle, check out this blog: http://bit.ly/1tfpube. A lot of useful information about athlete training, diet plans, fitness programs and other important things for athletes, as well as for others who want to be fit.