Everyone Has An Opinion

I remember when I was getting married (*cough-cough* 10 years ago!) that every little decision that was being made had ten different opinions added to the mix. I was young though, and pretty much handed over the reins to my mom. All I cared about that day was the fact that I got to marry my best friend, and all the rest was, well...icing on the cake. Sure, I picked out my wedding dress and I tasted food and our cake, but when it came down to it, I just didn't really have much of an opinion. Which, if you know me and my very type-A personality, is a shocker. Maybe I was just young, or, maybe it really was the fact that on that day nothing else mattered except for me and my future
hubbs :) 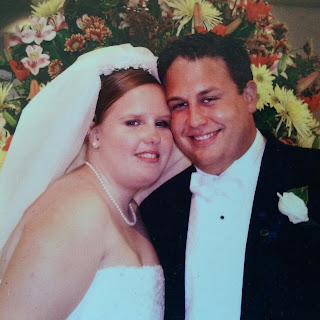 
Flash forward 10 years and the same opinion givers about your wedding often pop up out of the wood work when you tell them you're pregnant. Most times it is a nice gesture, other times it's...not. Yesterday I had a run in with one of the later, and it left me questioning a lot of things.

Back up a few days and I have been feeling great. I ran 43 miles again last week and my legs were finally showing up. I feel like this MAF training is actually working as I see the mile times I am running go down. (side note, I am by no means worried about pace - this is just a nice progression) Sunday the hubbs and I set out to do my long run. I had a 2 hour run to do with some specific HR zones to hit. I felt super good the first half and I was hitting some paces I hadn't seen in so long. But about 3/4 of a mile away from where we started and our turn around, I got some major sharp pains in my "belly" area. They weren't going away with a slower pace or more water. So, when we hit the half way point, I had to call it a day. I wasn't bummed but I wish I had been able to keep going. Later that night the cramping started up again. They tell you when you're preggo that drinking a big tall glass of water usually solves most aliments. I chugged water like crazy but the cramping persisted. Monday morning I woke up feeling good, no cramps so I just chalked it up as some "stretching." I did my easy run Monday morning but again, by Monday night, I was having full on contractions again. I drank more water, put my feet up and tried to de-stress.

This time though, they weren't going away. They were pretty intense by late Monday night and they were taking my breath away. Finally I decided to call my SIL (the labor and delivery nurse) and ask for her advice. She told me to count them and see if they got longer and more intense while still chugging the water. They didn't get longer but they were still happening in waves, about 5 an hour. I finally fell asleep though, and slept great.  Yesterday, though, I woke up and was so sore. And, as I made breakfast, I had the most intense contraction yet. So, I broke down and called the advice nurse who sent us right away over to the hospital.

Good news, baby is just fine! He is a busy, busy little boy! (And I can feel him squirming around now!) But we did find out that I was pretty dehydrated. WTH? I had been drinking water like it was going out of style and yet I was still dehydrated? So, I got some fluids in me and they sent me home. BUT...not after the on-call doctor decided to lecture me about running.

I will try and be nice here, but when you're getting advice about running from an over-weight, although young, doctor, my opinion of her goes out the window. I had been poked and prodded all morning and relayed my story. Every time I told someone I was a runner, their eyes lit up like Christmas trees. And when I told them how much I ran - yeah, shock and awe. THANKFULLY the hubbs was there. Anytime any of them questioned my sanity, he was there to back me up. He would say things like, "oh, you don't know, she has cut WAY BACK," or, "she has slowed WAY DOWN, trust me." They didn't understand still. And when this doctor came in, the doc in charge, who hadn't even examined me or questioned me, merely looked at my chart and listened to relayed information told me that I had to quit running! She even asked me how far a 10K was!! I was shocked - and so was the hubbs. She went on to tell me that running is not good for pregnant ladies, that it puts too much stress on the body, that your form suffers, that the josseling of the baby isn't good, and so on and so on giving every excuse in the book. WOW. I just listened though, and nodded my head and took her advice that I needed to up my game in the hydration department.

As soon as she was gone I looked at the hubbs and said, "you have to be kidding me, right?" He told me that as long as our doc was still on board and I am running with my HR monitor and listening to my body, he will still support me. He also said she was an idiot - god, I love that man! I have always known since the beginning of this pregnancy that there are two school's of thought when it comes to running/exercising during pregnancy. One being, that if you have been doing it all along, and you watch your intensity and listen to your body, there is no reason why you can't keep doing it. The other being that you should just rest, become a sloth, or as the L&D doc told me, "take up speed walking." Thankfully I have the doctor that is on board with my running. Funny, my doc is older, and one would think this would lead him to be more "old school" and think that exercise is bad. While this younger doctor I saw yesterday (she was no older than me) would be more on board with exercising and knowing the new studies that go along with it.  Complete opposites.

Yesterday was a wake up call. I am not stupid enough to think I can keep doing what I have been doing and expect different results without change. I will work on my hydrating while running and I will be more aware of my body. I have said from the beginning that if one day I can't run because it will effect the Blueberry, then I will stop. But so far, that little dude is as healthy as he can be in there and there is no reason to stop. Opinions about everything in pregnancy are all over the place. The second a woman sees that you are preggo, she wants to share her story or give you a piece of advice. Sometimes I don't mind stopping and listening, other times, just keep it to yourself. And let me tell you, men are not exempt from handing out advice! Just the other day a guy told me that his wife used this great nipple cream and I should try it! WHAT THE HELL? Yeah, you get bombarded at every possible angle.

On a lighter note, I am beyond the half way mark! WHOO HOOO! BUT, where has time gone? And I can finally feel the Blueberry kicking and squirming away. He loves when I eat peanut butter or something sugary - he does summersaults and kicks like David Beckam. And, he likes to be busy at night...when I'm trying to sleep. Yeah, that is not the fun part. But it is such a relief to finally feel him in there, to not to have to guess if everything is ok - it's just a little bit of reassurance that goes a long way.

There ya have it - some highs and lows of my week. I know not every week is going to be good and not every week will be bad. It's just hard to find a balance, pregnant or not, between the good, the bad and the ugly. Speaking of ugly, here is my latest bump pick - yeah, he is a growing Blueberry! 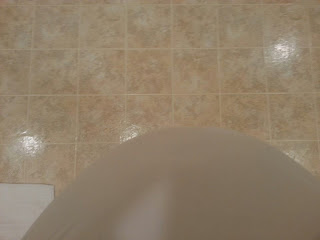 UGH!! Does that doctor also think you should stop driving because you could possibly get into a car accident? Or what if a meteor hits your house? Maybe you should build an underground bunker to stay in until the Blueberry comes? Oh, but then there is the chance of an earthquake. Grrrrrr!! I just don't understand why a doctor would tell you to suddenly stop doing something that is normal. I would bet money that if you said you were a walker, she'd say "Oh good, keep that up!" And don't EVEN get me started on the absurdity of an out-of-shape medical professional trying to give advice to an athlete.

I could rant for quite a while longer, but I'll stop now since we all know where I stand. :-) Blueberry movement = happy Blueberry, and that's all that matters!

ohhh the opinion monster. I have always known that if we choose to have children I'll need to buy ear plugs to not feel overwhelmed with david's family :)

1. Your belly is adorable. 2. You know your body. Listen to it & tell Dr. Fatty McButterpants she could use a little running.

Have you considered getting a scale that measures body water? My scale gives a body fat % and also a water %. I check my water before and after I run and have a good idea of what is normal for me.

Also, I totally feel you on not wanting advice from a non-runner. When I told my doctor I wanted to run the LA Marathon in the middle of chemo he said he didnt want me to. when I pressed him later for a reason - was it harmful to my treatment? risks - he countered back with "could I even train in time for that race". Ummm... it was 12 weeks out. I then asked him if he ran (obviously not) and he said no, he gets shins splints after a couple miles. I told him to get new shoes and then instantly discredited half of what he said about me not running. I talked it over with my fiance for a bit and at my next appointment asked again if it was okay for me to start training and see how things went, and I got a thumbs up. Like you I've been cautious and listened to my body and in the end I ran the race, no problems! Well, I was horribly slow, but aside from that no problems.

I think someone who doesn't run doesn't understand the ability of someone who does run .. a lot. Anyways, at my last appt the doctor asked when my "next race" was. :o) ha! Success.

Hi Katie! My name is Heather and I wondering if you would be willing to answer my question about your blog! Please email me whenever you get a free moment at Lifesabanquet1(at)gmail(dot)com :-)

You can learn more about healthy lifestyle and how to exercise at cardiochick . Another helpful resource is airbnbguru where you can find info about travel. Also, great post about water bottles and socks for those who want to be prepared for outdoor activities like skiing.