Women have been giving birth since the beginning of man-kind. Somehow that is reassuring to me, that I am definitely not in uncharted territory. But in the same breath, each pregnancy is different and however natural it may be, there is bound to be some bumps in the road and surprises.

I struggled with weather or not I wanted to share this bit of news with the interwebs. But I vowed that I would be as honest with all of you as I could, and leaving this part of my story out would be doing not only a disservice to myself and my own documentation, but to all of you. Many things are very predictable in pregnancy, like you are going to gain weight. You are going to to be overwhelmed by the thousands of baby products that someone has declared as a "must have," for every new mom. While other things come up that you could have never predicted.

Last Thursday my hubbs and I went in for our 2nd ultra sound and what is called a "NT scan." All along pregnancy, you are tested for so many things that can make your head spin and create a lot of fear in you. In all reality, most are not meant to add to your fear, but to reassure you that you are doing everything right and that baby is right on track. The "NT scan" is a scan that is done twice during pregnancy, first between the weeks of 11w 5d (11 weeks & 5 days) & 13w 6d, then again from 15w 5d & 18w. It is a scan to measure the fluid in the baby's neck and check to see if the baby has formed correctly or if there is a high chance it will have Spina Bifida. Spina Bifida is a horrible disease, it basically means there is a high chance that baby will have some sort of paralysis. They also do a blood test at this point to see if they baby will have a whole other list of genetic diseases like Downs Syndrome. To say going into these tests is scary is an understatement. At this point there is nothing that a mother can really do to prevent any of these. They almost all occur at a genetic level that is out of your control. There is a lot of science behind the thinking that if a mother has an adequate level of folic acid in her at the time of conception and through those first few critical weeks of pregnancy, the chances of Spina Bifida go down. But again, many times, it is out of your control. The other side of all of this genetic and disease testing is that they only have an 80% accuracy rate! 80%?! I know personally my best friend had a positive test for Spina Bifida only to have her son come out perfectly healthy. So, along with the fear, there is a sense that more often then not they are wrong. On the flip side of this, even if you get a "negative" reading, it could, ultimately, be wrong. Originally I had said no to all testing. I just didn't want to know. I had this sense that what ever was meant to be would be, and god willing, if we got to the other side, that we would love this child no matter what - "faults" and all. But they do do all of this testing so early because some parents decide to terminate. We did it on the off chance that if something was found we could get the help we needed before hand and at birth, they would be ready.

I bring up all this "science" stuff because it really does come into play when you are pregnant. I had no real clue of all of this until we came home from our first visit with the doctor with no less than a giant stack of pamphlets that describe everything and anything that they test for and and can go wrong in pregnancy. To say it's a miracle is selling it short.

Well, our test went well. Our baby is right on track and even measuring ahead of schedule! (We are blaming it on it's big head! No seriously, the head is big! Which is more scary for me! Eeek!) The "NT scan" came back negative and that was reassuring. But what I struggled to share is that we got another piece of news that day. Something so very unexpected.

I was laying on the table as the technician was doing the scan and within a minute she was asking me some crazy questions. The first one being, "did you go through fertility treatments to get pregnant?" Uh, no! Her response, "oh, wow." Her next question, "well, did you know you were carrying twins?" UH NO!!! I was SHOCKED!! TWINS? ME? WHAT?? HOW DID THEY MISS THIS THE FIRST TIME? Her next statement sent me for a tailspin though, when she said, "well, looks like you were carrying twins, but you are no longer." I really didn't know what to feel. Up until this point it was never on my radar. Sure there were some jokes thrown around when we first found out we were pregnant that it could be twins, but we never really believed it. Twins don't run in either of our families, so the possibility seemed non-existent.

After a few measurements with the machine, she as able to see that "Baby B" had stopped growing around 8w and 1d. Wow.... Through all of this, the hubbs was still left in the waiting room and I was all by myself to absorb this information. My first question was, "but is the other baby OK???" And she said very reassuringly, "yes!" In fact, baby was so busy doing somersaults that it was hard to get a good measurement for the NT Scan. Baby was not cooperating for her and was active it took almost 3 times as long to get the test done. And once I heard how healthy and active "Baby A" was, I pretty much let the other news of "Baby B" float to the back of my mind while we finished up the test. The fact though that she kept saying "Baby A" and "Baby B" was a little foreign to me. My next question was, "how did they miss this the first time?" Turns out, what we thought was an extra large "yolk sack" for "Baby A" was actually the backside of the placenta of "Baby B," and since we had the first ultra sound done at 8w 4d and the doctor only heard one heart beat, it never occurred to anyone at the time there could have been two.

Finally they brought the hubbs in, and trying to make light of the situation, the first thing I said to him was, "did you hear? You really dodged a bullet!" Of course his response was "what the heck are you talking about?" The technician and I went on to explain to him what we had found out and his reaction was, "but is baby OK!?" It felt good to be able to hear and say, "YES!" Everything is on track! 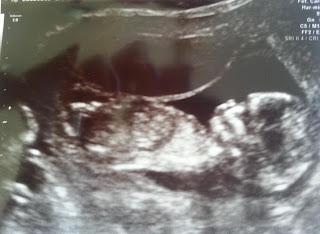 The Blueberry! See the "halo" above the Blueberry's stomach? That is "Baby B's" placenta﻿

I can honestly say I was feeling OK with everything we had learned. I pretty much put out of my mind any feelings of sadness on the way home. All we could do was be so excited to see the pictures of the baby and how it has finally turned into looking like a "real human" and not an alien. And to hear how active it was made us so happy. It wasn't until I was alone later that morning and the hubbs had gone off to work that it hit me. I called my mom to tell her how good the appointment went and our "discovery." That is when I lost it. And so did she. I think it was only natural to have a sense of sadness. To have a sense of what could have been. But after the reassuring words only a mother could give, I came to the conclusion that what has happened was for the best. I am SO grateful that I didn't know this whole time. That I wasn't preparing for twins only to be disappointed. I know that the fact that "Baby B" didn't make it is better, that it most likely had something very wrong with it and mother nature has a way of "taking care" of the really sick ones.  We did learn that I had released 2 eggs, and this meant that they were not identical which is good news for "Baby A." It means that that baby is healthy and strong.

There have been a few times since the appointment that I have had moments of sadness and a feeling of loss. But I know that this will pass as we get farther along. I am sure feeling like I am mourning is totally natural. But really, I am OK with all of this. I am so grateful that I didn't have to deal with a miscarriage or any real disappointment. I am so grateful that there were 2 eggs and one is so healthy and on track. And again, I am comforted knowing that there was nothing I did or could have done to change that outcome.

So, surprises come all along with pregnancy, and I am sure this will NOT be the last one, but I am sure that for the most part the next surprises will usually be good. I am feeling so much better in the 2nd trimester and everything seems to be on tack.

I finished off another great week of running. I hit 40 miles and even had my longest run since the Blueberry showed up. On Saturday I ran 10.1 miles! And yes, all on the treadmill. I kept telling myself at certain points I could take a walk break, but I never did and I hit all of my HR zones like I was supposed to. I felt great afterwards. But on Sunday I was just wiped out! My legs weren't sore or tired and mentally I felt good, but my body was just plain tired. I decided a rest day would be OK.

I will leave you all with a pictured of how much I have grown! I have totally "popped!" The doctor confirmed it is "all baby," but man, I feel big already! And we are just barely over the 1/3rd mark! Sheesh! 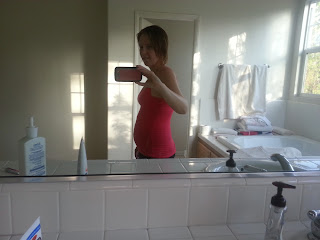 Obligatory bump shot
I'm off to keep tracking all my Boston friends! Today has been a little hard seeing all the Boston updates on Twitter and Facebook. I had been dreaming of being there again for 3 years. But I only have to look down and see that I have a bigger job right now and I will be back. Oh yes, I will be back!
Happy Running!﻿

omg wow! a lot to digest in one appointment! So glad that your baby is doing well! I think you're running more than I am now and I'm not pregnant. :)